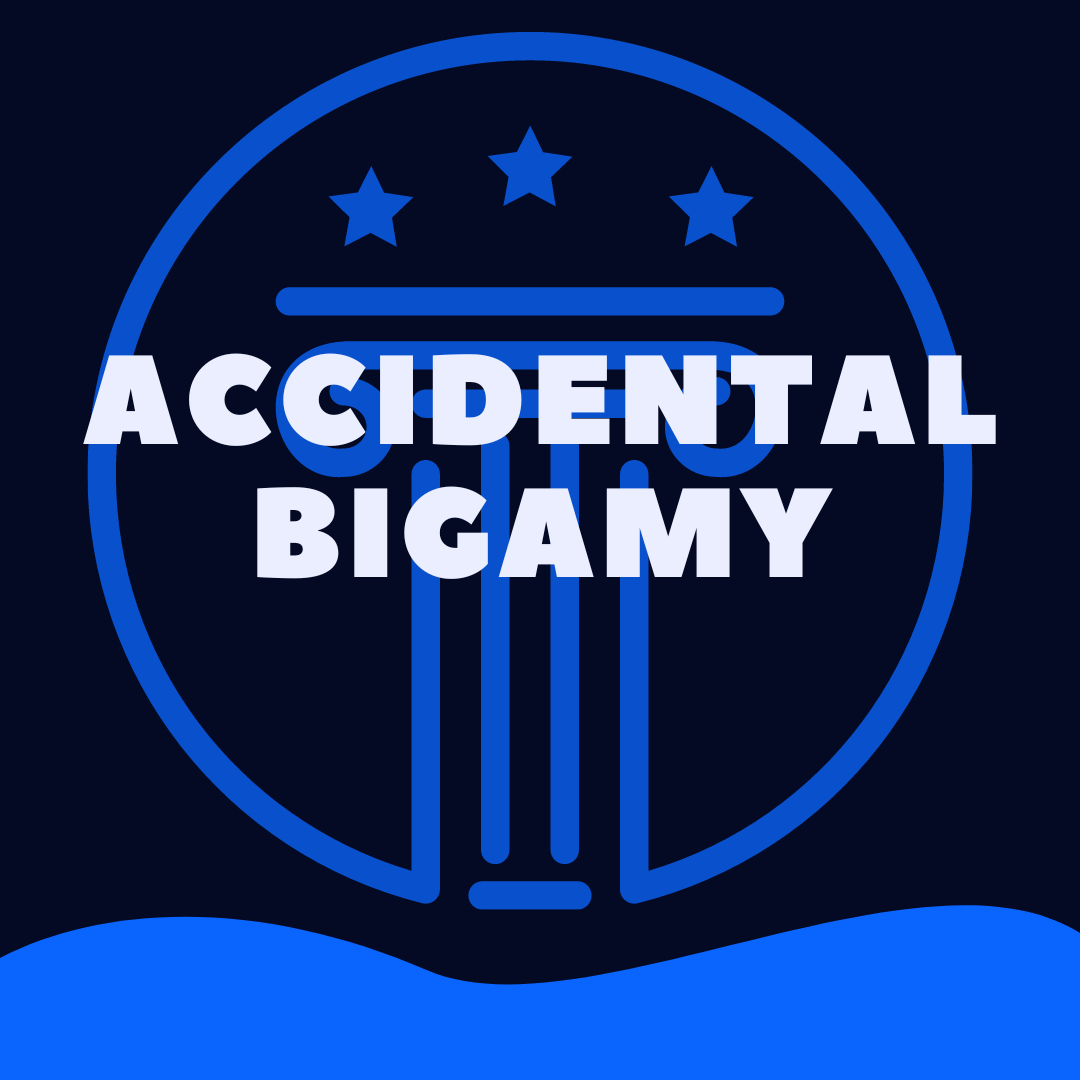 Accidental bigamy doesn’t happen often, but when it does, ignoring it is not recommended.

In the article that follows, we’ll discuss what bigamy is, and some options for what to do about it.

First, what is Bigamy?

Many states include a law that provides for the defense of good faith/reasonable belief that the parties were both eligible to married, but not all.

Accidental vs Intentional Bigamy, and Does It Matter?

If you are in a state that has a ‘strict liability’ law, then the defense of good faith or reasonable belief won’t matter.

If you are lawfully married when you get married again, then you’ve broken the law, period.

There are several options for what a person can do if they discover that they are an accidental bigamist (meaning they didn’t intend for it to happen).

Here’s a few scenarios (there could be more):

Previous Marriage Is Still In Effect

If the parties to the second marriage want to be married lawfully, they may have to do the following:

Depending on the situation, the parties may get their own lawyers to assist them through this process, or work together with one lawyer to make it happen.

Issues may come up if the previous marriage cannot easily be terminated (like the previous spouse cannot be located), or the property that was accumulated during the first marriage is subject to division with the previous and still lawful spouse.

Previous Marriage Is Not In Effect

If the previous marriage was in full force and effect at the time of the re-marriage, the subsequent marriage is technically invalid, even if the first marriage was subsequently terminated.

To resolve this, the parties may have to:

Avoiding Trouble With The District Attorney

The trouble with trying to straighten out this matter is that the parties may incriminate themselves by filing documents to seek an annulment on the basis of bigamy.

Depending on the state, the accidental bigamy may shield the parties from the criminal side of the law, while in other states, the accident may not.

Trouble shooting this with experienced criminal defense and family lawyers in the jurisdiction may result in a decision to pursue the matter in a different venue, if that is possible, to take advantage of laws that suit the parties and expose them to fewer consequences.

While most lawyers will recommend taking action to resolve an accidental bigamy situation, some lawyers may recommend the ‘no action needed’ strategy.

In some situations, trying to address the accidental bigamy may create more harm than it resolves.

Definitely talk through all the pros and cons of the various strategies with the attorneys before taking action.

Initiating a bigamy report could have consequences, depending upon who is doing the reporting and who is involved.

In some cases, the police do nothing whatsoever, and advise all involved to take it up in the civil courts.

In other cases, a lot can happen.

For example, let’s say a third party citizen, who is not either a husband or wife in the relationship, (like a neighbor) discovers evidence of the bigamy.

The neighbor could contact the police about it and the police could pursue an investigation, which could later lead to a prosecution.

The criminal prosecution could result in the loss of employment for the adults involved, which could produce a cascade of effects for the remainder of their finances and family.

The well-meaning neighbor might have only wanted to report the suspected crime, but may not have wanted to cause the family to lose their home and have the children of the adults pushed into foster care.

Or, let’s look at the example of a wife who realizes that her husband was already married.

Angry, she decides to report her husband to the police for bigamy.

The result could be that her marriage to her husband is voided, which means that she can’t divorce him.

Since she can’t divorce her husband, she also can’t be awarded spousal support or other items of his property that might have been hers due to their marriage.

The husband’s criminal conviction could result in the loss of his job, and make it harder for him to get a job paying an equivalent amount, thereby making it difficult for him to pay child support.