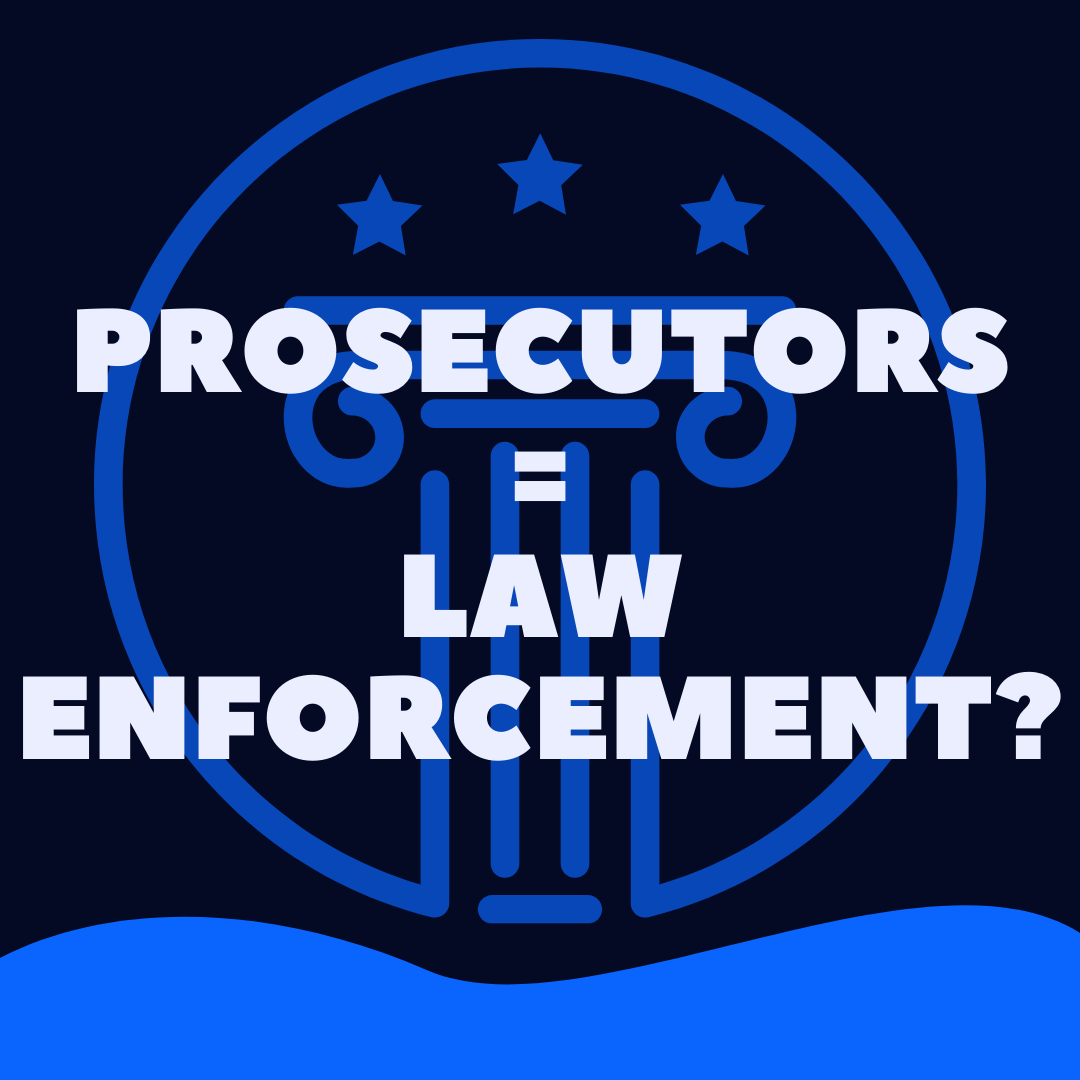 In the article that follows, we’ll explain why.

While it differs from place to place, jurisdiction to jurisdiction, most prosecutors are considered law enforcement.

Many people use those terms (law enforcement and police officer) interchangeably.

They aren’t the same at all.

“Law enforcement officer” in most jurisdictions is a term defined by statute.

In general, it includes police officers of all kinds (from immigrations officers to traffic patrol officers to peace officers), as well as prosecutors.

Think about all the people who are “sworn in” and wear a badge.

If you think about the words “law enforcement” it makes sense that a prosecutor would fit within the definition.

Prosecutors are generally required to take an oath of office and “swear in” just like police officers.

After all, what is a prosecution (in the criminal courts) but an attention to enforce the laws of the city/state/country.

In fact, the prosecutor in charge of the government officer (like THE District Attorney) is often considered to be the “chief law enforcement officer.”

Most people would assume that the chief of police would be considered the chief law enforcement officer, but that is not so.

Do Police Officers Work For Prosecutors?

While they often work together closely on cases (and have united goals), prosecutors are not the “bosses” of police officers.

Most prosecutors are employed by and answer to the government agency that hired them.

The City of Nashville, as an example, or the State of North Carolina, or the United States of America, as it were.

Police officers are also employed by and answer to the government agency that hired them.

In general, the prosecutor gets the case from the police agencies which originally investigated the case, such as the local sheriff’s department, state troopers, or municipal police force.

Those individuals who built the case are now witnesses in the prosecutor’s case, and can/will be called to testify about their investigation.

This is why police officers are almost always served with a subpoena to ensure their appearance on the specific date and time at court to testify.

Prosecutors and police officers often work together because they have a unified goal of enforcing the laws in their jurisdiction.

Which means that if a prosecutor needs more investigation done on a case, if they ask the police who brought the case to them to do more work in a particular area, that work will get done.

But not because the prosecutor has control over them.

Prosecutors often hire independent investigators who are not police officers or law enforcement officers to assist them with their cases as well.

Sometimes the police officers are not the right individuals to handle a piece of evidence in a case.

No, police officers are not the clients of prosecutors.

Prosecutors do not represent victims either.

The government agency that they work for.

That might be the state, federal government, county, township, or even city.

As such, prosecutors have no attorney-client relationship with police officers, and the benefits of those relationships (such as confidentiality) do not apply.

This mean that the conversations between a prosecutor and a police officer (unless some other privilege applies) could be evidence in a particular case if it was found to be relevant.

Hypothetically, a prosecutor could represent a police officer but in a very narrow scenario.

First, the prosecutor would need to be a lawyer who did both prosecution and private retained work.

Second, the case could not be a criminal case that the prosecutor’s agency was handling (think conflict of interest).

For example, a private retained attorney who did prosecutions might assist police officers with preparations of wills/trusts, or with probate administration in the event of a family member’s passing.

Want to learn more about attorneys and the legal justice system?