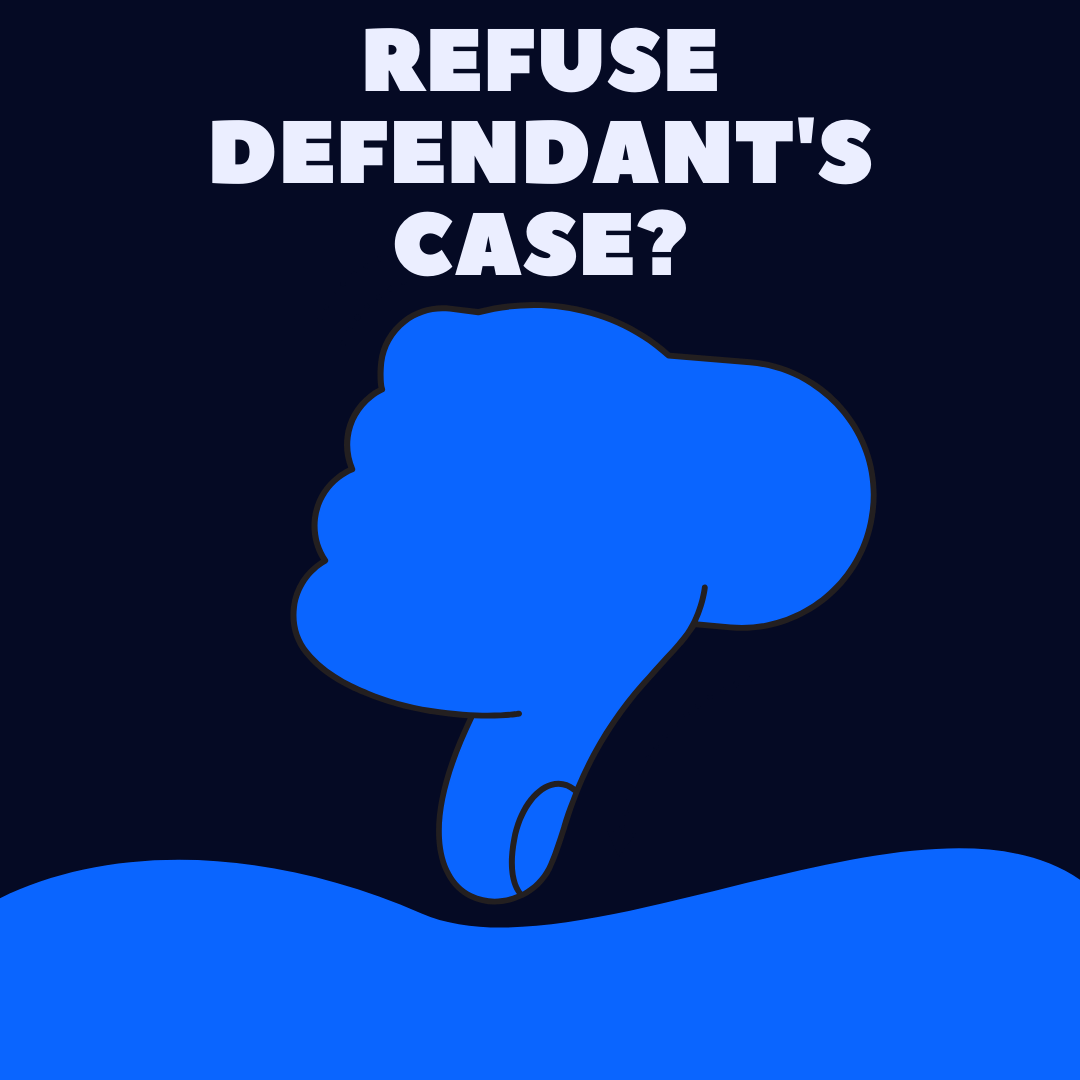 Yes, a defense lawyer can refuse to take a case.

There are many reasons why a defense lawyer might decline to take a case, but it’s probably not for the reason(s) you think.

Can A Defense Attorney Refuse A Case? (EXPLAINED)

To form an attorney client relationship, in general, both parties have to be an agreement that the relationship should be formed.

This is what gives attorneys the power to say “no thanks” when a potential case is presented to them to defend.

In private retained relationships, attorneys interview their clients extensively before making the decision to take a case, before agreeing to represent the client.

Court Appointed Lawyers Pretty Much Take All Cases Assigned To Them

In public defense cases (court appointed attorneys), many attorneys work on contract with a company or for the state. They do not have an opportunity to interview their clients before beginning representation, and basically agree to represent any client who is assigned to them by the court or the group that manages them.

In these situations, the defense attorney is still free to ask to have the defense client assigned to another attorney (filing a motion to withdraw from representation), assuming that the change in attorneys happens at a time when the client is not hurt by the swap to another appointed lawyer.

With court appointed lawyers, it is rare for the attorney to be present when the client is assigned to them, and they do not do anything to make sure that the attorney and client will be a good fit for each other.

The Personal Experiences Of A Former Defense Lawyer

As a former defense lawyer who has interviewed hundreds of potential clients, I can speak from experience.

And I have declined to take many criminal defense cases.

Most of them, in fact.

But in general, I did not refuse to take a case because I had concluded that the potential client was guilty.

In general, a client’s guilt or innocence had little to any bearing on whether I decided to agree to represent a client.

Instead, the usual reason that I declined to take a particular case was that the potential client could not afford the fees to retain me and my office to represent him or her.

The Facts Aren’t Too Relevant

In a consultation, we rarely dip in too deeply into the “facts” of the case.

Instead, we mostly explore whether we could work together well, and whether my office could actually assist the potential client in the way that he wants to be helped.

For example, a client may come in facing multiple serious felony charges.

He wants a guarantee that we’ll win his case.

There are no guarantees in the law, as there is much that we lawyers cannot control (like the facts).

I would decline his case, and he’ll keep shopping until he finds a lawyer who says the things to him that he needs to hear.

Are We The Right Fit?

We also explore whether the lawyers in the office actually have the experience and expertise and knowledge to effectively represent the particular client.

Just because an attorney is a defense lawyer, doesn’t mean that he or she can competently handle all kinds of defense cases.

Murder cases, for example, are a type of case which requires knowledge and experience.

No one who has never worked on a murder case before should agree to represent someone accused of murder.

The same is true for other serious felony crimes.

The initial interview helps us highlight those aspects before agreeing to take on representation.

Other Reasons A Defense Attorney Would Decline

One of the primary reasons I would decline to take a case, even if the client had money to afford me and I had the expertise he needed, was that I just didn’t like him.

I couldn’t see myself wanting to spend maybe hundreds of hours working with him and for him. (We only live once, even us lawyers!)

Secondary to that, I’d refuse if:

Does The Client’s Guilt Matter In The Discussion Of Representation?

The weight of defending an innocent client over one that is definitely guilty is significant.

As a defense lawyer with a guilty client, it is much easier to sleep at night knowing that if you screw things up, the worst thing that happens is that the client ends up in jail, which is probably where he belongs anyway.

As a defense lawyer with an innocent client, it is so stressful, as you know that your mistakes could put a man who deserves to be free behind bars for maybe the rest of his life.

But in general, for most experienced defense attorneys, the question of guilt or innocence is not terribly relevant to whether or not they’ll take the case.

The better question is whether the attorney can actually assist the client or not (and if the client can afford his services).

If the attorney cannot help the client (even the guilty one), then he won’t accept the case.

Can An Attorney Refuse To Take Cases Of People Who Are Guilty?

But since a large majority of people who are charged with crimes are guilty, it is pretty darn hard to pay the bills of the firm when you wait for only innocent clients who have money to hire an attorney.

Innocent people with money to hire a lawyer are almost like unicorns.

A mythical creature that most people have never seen.

Why Do Attorneys Represent Guilty People?

Lawyers understand that in the judicial system, everyone has rights.

Guilty people have the same rights to a fair trial as innocent people.

Guilty people have the same rights to effective assistance of counsel as innocent people.

And there is no doubt that an excellent lawyer massively helps in a case where the defendant is guilty.

Mistakes caused by ineffective assistance can actually overturn a case, and put a guilty defendant back out on the street to do more harm.

Our justice system desperately needs good attorneys who are ready and experienced to help guilty people through the justice system.

And not only does the attorney help protect the rights of the defendant, he also protects the rights of all other citizens in the country by helping make sure that their rights are not infringed upon.

But most defense lawyers understand that the practice of law is a business.

And generally that means taking on cases that involve some pretty rough facts.

But one area of criminal defense I avoided completely was felonies that rhymed with tex crimes, especially if children were involved.

Everyone has a line somewhere, and rhymes with child tex crimes was mine.

This was especially the case after I had a family of my own.

Want to learn more as you get ready to meet with your lawyer for the first time?