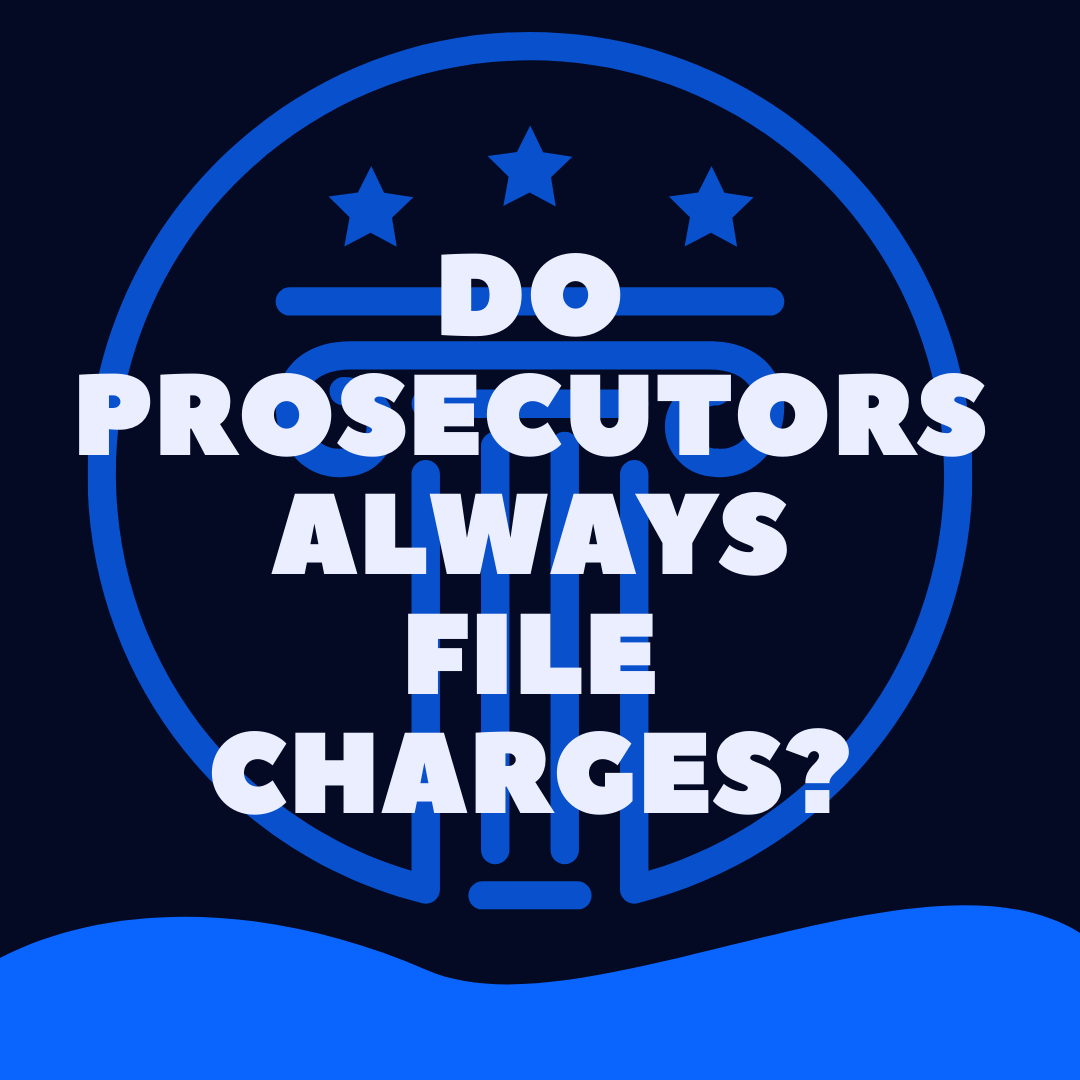 No, prosecutors do not always file charges.

In the article that follows, we’ll explain some of the reasons why a prosecutor might decide not to file a case.

Prosecutors do “intake” on a daily basis.

Intake involves reviewing the reports and tickets filed by police officers or even civilians.

The prosecutor makes the decision about which causes should go forward in the court system, which need to be investigated further, and which should just wilt on the vine.

There are many reasons a prosecutor might decide to “no-file” a case.

The first and most obvious one is that the evidence that exists in the situation doesn’t constitute a violation of any law.

The second situation is where the prosecutor might believe that a crime occurred, but the evidence to prove the case is unavailable and could not ever become available.

For example, let’s say that a member of the public reports seeing John Doe jump the fence into her backyard, committing the crime of trespassing.

There’s no video, audio, or admissions by John Doe.

Then the member of the public passes away from natural causes.

Since the rules about bringing in the hearsay statements (out of court statements offered for the truth of the matter asserted) are very stringent, it is unlikely that the deceased witness report about the trespass could be admitted.

Since there is no other evidence implicating John Doe in the alleged crime, the prosecutor would probably no choose to pursue the case, even though he believes that deceased witness statements.

The third situation is where the prosecutor does not believe that a prosecution against the offender would be in the interests of justice.

For example, let’s say that a defendant embezzles money from his employer.

The employer learns of the embezzlement and reports the theft to the authorities.

Before the prosecutor has a chance to review the case and file it, the defendant returns all the money with interest, making the employer completely whole.

While a crime had been committed, the victim in the case was made whole by the defendant, and to punish the defendant for his actions would cost the taxpayers a lot of money.

Justice might have demanded a prosecution of the defendant had not returned the money.

But since the victim in this case had his property returned and no longer desired the case to continue on a public forum (exposing the apparently vulnerable financial practices of his business), justice would not demand that the case be filed.

In other situations, the victims have a strong say in the prosecutor’s decision to go forward.

Sometimes (though not every time), if the victim does not want the case to proceed, the prosecutor will agree not to pursue it.

And sadly, sometimes a prosecutor’s office just doesn’t have the money to prosecutor all of the cases of a particular type that are reported.

The government has to focus its resources on where it can do the most good for the community.

Many cases come across the desk during intake that show that a crime had occurred, but the evidence presented isn’t enough in the prosecutor’s opinion to convince a jury beyond a reasonable doubt.

Or perhaps there were some obvious actions that weren’t taken (like testing the white powder in the baggie) that would help the prosecutor’s case.

Or perhaps even make it possible for the prosecutor to file additional charges in the case.

(After all, it is a common tactic for the government to file multiple charges against a defendant and then agree in negotiations to dismiss one or many of them if the defendant agrees to plead guilty to something.)

They won’t get the “no-file” designation, but that doesn’t mean that charges won’t be coming down the pike later.

What If The Case Is No-Filed? Does That Mean It’s Over?

Maybe, but maybe not.

The prosecutor has whatever time is allotted by the applicable statute of limitations to file charges against a defendant.

If a citizen commits another crime, that no-filed case might come right back out of the closet to haunt the defendant.

After all, so long as the prosecutor believes he can prove the case beyond a reasonable doubt, he can file it against the defendant.

The defendant might feel like this is “unfair” to him, but from the prosecutor’s side of things, the threat of filing the no-filed case should have encouraged that defendant to avoid criminal activity.

Waiting for the prosecutor to file (or not) often leaves a potential defendant feeling like he is living in “limbo.”

He might feel like he cannot move forward until he knows for sure, like with moving, applying for school or a new job, or having children.

Some lawyers might tell their clients in this situation to just keep their head down, and hope that the prosecutor forgets about him, or gets too busy to come back to the case.

Some lawyers might tell their clients in this situation that it is best to confront the prosecutor, in order to get some closure either way.

That’ll be between you and your lawyer, as there are pros and cons to both strategies.