Is It Illegal To Change Lanes In An Intersection In Indiana?

No, we haven’t found any laws which specifically prohibit drivers from changing lanes in an intersection in Illinois.

But the lack of a specific law prohibiting the behavior doesn’t mean that you won’t get a ticket if you do it.

Is It Illegal To Change Lanes In An Intersection In Indiana? (EXPLAINED)

The best place to look at the specific traffic laws in Indiana is not in a posted DMV driver’s manual.

Instead, you should look at the specific Indiana statutes that govern drivers in the state.

While there doesn’t seem to be a statute on point, people do get tickets in Indiana for their behavior in the state’s intersections.

A person may not….change from one (1) traffic lane to another unless the movement can be made with reasonable safety.

IC 9-21-8-24 Slowing down, turning from a direct course, and changing lanes; performance with reasonable safety; signal

This particular statute gives law enforcement officers very broad powers to hand out tickets for behavior that appears to be unsafe in an intersection.

You can also get a failure to maintain a lane type ticket for changing lanes in an intersection under this statute:

Whenever a roadway has been divided into two (2) or more clearly marked lanes for traffic, a vehicle:

(1) shall be driven as nearly as practicable entirely between the lines marking the single lane; and

(2) may not be moved from the lane until the person who drives the vehicle has first ascertained that the movement can be made with safety.

As for intersection specific laws, Indiana has IC 9-21-8-21Intersections (right and left turns), which governs how you can make a turn in an intersection.

Generally, the reason a person would get a ticket for changing lanes in an intersection is not because of the strict prohibition against lane changes, but instead the manner of the lane change.

For example, if you didn’t signal in advance, if you were traveling at a higher rate of speed, if you caused an accident, or if you acted suddenly.

Why Would Some States Make Lane Changes In An Intersection Illegal?

Intersections can be really dangerous places.

Many accidents occur on a daily basis in intersections.

There are pedestrians crossing, signals sending traffic one way or another, and people entering into the roadway on a red light after stopping.

The goal is to try and reduce accidents in this vulnerable place (and injuries).

The outcome of a crash in an intersection for you personally really depends on the circumstances of the wreck.

If the wreck was not serious, and little to no damage to person or property results, you might even receive a ticket on the scene or after the fact.

But if the wreck led to serious damage to person or property, the fact that you changed lanes in an intersection (and caused a crash) could be serious.

If you think that it is possible that you could be charged with a crime more serious than the changing lanes traffic ticket, it is highly recommended that you confer with an attorney near you who is well versed in both criminal defense and motor vehicle personal injury cases.

While you might tender the wreck on the civil side to your insurance carrier to deal with, the criminal defense lawyer can guide you through the investigation in the best possible way so that you don’t end up making the case against yourself on the criminal side while trying to comply with the demands of your insurance company to resolve the civil claims.

Can You Go To Jail In Indiana For Changing Lanes In An Intersection?

Generally, changing lanes in an intersection is a civil infraction, which is not punishable by jail time.

However, if the circumstances of the lane change were extreme (like reckless driving, intoxicated driving, street racing), or seriously physical injury or property damage resulted, you could be looking at criminal charges that are punishable by jailtime.

These could include Reckless Driving, DUI, Speed Racing, Assault, and more. Is It Illegal To Change Lanes In An Intersection In Illinois?

Is It Illegal to Change Lanes in an Intersection in Iowa? 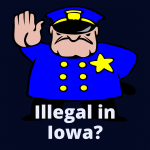