Is It Illegal To Change Lanes In An Intersection In Nevada?

Our review of driving statutes failed to find a law prohibiting changing lanes in an intersection in Nevada.

Nonetheless, there are several interesting statutes relating to lane changes, overtaking, or passing other vehicles, and other requirements for drivers besides these.

Read on to learn more about the driving laws concerning intersections and more.

Is It Illegal To Change Lanes In An Intersection In Nevada? (EXPLAINED)

Nevada lays out the expected responsibilities of drivers traveling on roads with multiple vehicles going in different directions:

Drivers of vehicles proceeding in opposite directions shall pass each other keeping to the right, and upon highways having width for not more than one line of traffic in each direction, each driver shall give to the other at least one-half of the paved portion of the highway as nearly as possible.

Right-of-way under general Rules of the Road includes when to yield:

The driver of a vehicle approaching an intersection shall yield the right-of-way to a vehicle which has entered the intersection from a different highway.

Also, vehicles entering an intersection from more than one highway are made clear. So, drivers know when to slow down to allow the other vehicle to get onto the intersection:

The safe operation of a motor vehicle when either passing or overtaking, including the need to change lanes to do so, is stipulated in limitations on multi-lane traffic for left turns or overtaking on the left side:

A vehicle must not be driven to the left side of the center of a two-lane, two-directional highway and overtaking and passing another vehicle proceeding in the same direction, unless such left side is clearly visible and is free of oncoming traffic for a sufficient distance ahead to permit such overtaking and passing to be completely made without interfering with the safe operation of any vehicle approaching from the opposite direction or any vehicle overtaken.

Additionally, Nevada state law NRS 484B.210 also confirms the legal position when overtaking on the right side too.

Should It Be Illegal To Change Lanes In An Intersection?

Now we’ve established that it is legal to change lanes in an intersection in Nevada, a good question is whether it should be illegal or not?

The majority of state legislators have chosen not to make it illegal because other laws successfully lay down the Rules of the Road.

This common set of laws provides sufficient control and legal framework that it’s believed to ban lane changes in an intersection to be unnecessary.

Nevertheless, many drivers are under the false assumption that lane changes when driving through an intersection are illegal. But that’s not the truth.

So, It’s Not Illegal In Nevada To Change Lanes In An Intersection, Why Did I Get A Ticket?

Being issued a traffic citation isn’t only done because of changing lanes at the wrong time.

It has a smooth movement such that something out-of-the-ordinary stands out immediately. With driving, that’s usually a bad thing!

Any sudden acceleration or braking without a good reason raises questions.

Changing lanes repeatedly, perhaps without signaling ahead of time, is illegal in Nevada and likely pretty much everywhere else too.

It doesn’t allow other drivers to drive safely or maintain sufficient distances.

Other driving actions such as moving through traffic, changing lanes, overtaking, and being somewhat unpredictable are frowned upon.

Any of the above could have been a cause to see flashing lights, sirens, and a need to pull over… Then getting ticketed becomes highly likely.

Traffic accidents are always serious. A driver needs to stay at the scene and report the accident to the authorities too.

Should an accident take place in the middle of an intersection, then it looks particularly bad.

Was it necessary to change lanes at that time? Was it a mitigating factor or a direct cause of the accident?

When involved in an accident, and if anyone has been injured, it can be a good idea to seek out advice from an experienced Nevada motor vehicle accident attorney even if you have insurance.

Also, if law enforcement is already raising questions about driving style or culpability, or someone has been injured in the accident, then conferring with a Nevada criminal defense lawyer might also be a good move early on. 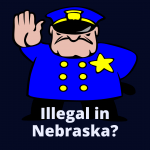 Is It Illegal To Change Lanes In An Intersection In Nebraska?

Is It Illegal To Change Lanes In An Intersection In New Hampshire?