Is It Illegal To Change Lanes In An Intersection In Wisconsin?

It is usually legal to change lanes while passing another vehicle in an intersection in Wisconsin, as long as there are two lanes of approved, same-direction traffic. However, there are some exceptions to this.

These are highly unusual, specific laws relating to changing lanes at or near an intersection. Few states stipulate as such. Read on to learn about these and other relevant Wisconsin laws.

Is It Illegal To Change Lanes In An Intersection In Wisconsin? (EXPLAINED)

Passing another vehicle both traveling in an identical direction when within 100 feet of an intersection – or traveling across it – is not permitted unless two lanes of same-direction traffic are validated under statute 346.10.

There is also an exception to this rule made in sub 3:

(2) Subject to the exception stated in sub. (3), the operator of a vehicle shall not overtake and pass any other vehicle proceeding in the same direction when approaching within 100 feet of or traversing any intersection unless the roadway is marked or posted for 2 or more lines of vehicles moving simultaneously in the direction in which such vehicle is proceeding or unless permitted or directed by a traffic officer to pass at such intersection.

(3) Outside of a business or residence district, the restrictions which sub. (2) places upon passing at an intersection apply only if such intersection is designated in the direction of travel by a traffic control signal, stop sign, yield sign or sign that warns traffic of existing or potentially hazardous conditions on or adjacent to the roadway.

Rights-of-way for intersections are specifically laid out in statute 346.18:

(1)  General rule at intersections. Except as otherwise expressly provided in this section or in s. 346.19, 346.20, 346.215, or 346.46 (1), when 2 vehicles approach or enter an intersection at approximately the same time, the operator of the vehicle on the left shall yield the right-of-way to the vehicle on the right. The operator of any vehicle driving at an unlawful speed forfeits any right-of-way which he or she would otherwise have under this subsection.

(2) Turning left or making a U-turn at intersection. The operator of a vehicle within an intersection intending to turn to the left or make a U-turn shall yield the right-of-way to any vehicle approaching from the opposite direction.

Getting into the correct position to turn and turning appropriately is legislated under statute 346.31:

(2) Right turns. Both the approach for a right turn and the right turn shall be made as closely as practicable to the right-hand edge or curb of the roadway. If, because of the size of the vehicle or the nature of the intersecting roadway, the turn cannot be made from the traffic lane next to the right-hand edge of the roadway, the turn shall be made with due regard for all other traffic.

The statute further clarifies left-turns, U-turns, and other activities too.

Also, there are limitations set out under statute 346.09 for overtaking on the left side:

If they live in one of the few states that make it illegal and don’t travel out of state, then that may be their entire driving experience.

Alternatively, they may just come to believe it’s illegal, even if it’s not illegal everywhere.

So, It’s Sometimes Illegal In Wisconsin To Change Lanes In An Intersection, But Why Else Might I Have Received A Ticket?

Other driving issues may have cropped up that either raised doubt about your driving abilities or brought them into question.

Going over the speed limit is not going to get overlooked.

Badly considered lane changes, even when falling within the law in one sense, may have been improperly completed.

Also, appearing distracted by holding your phone while making a call might well be another reason.

When a car accident happens, who is to blame is the big question.

It could be one person or perhaps several. Sometimes, people get blamed that shouldn’t have.

Also, obtaining the services of a Wisconsin personal injury lawyer is beneficial if the accident caused bodily injury to other parties involved.

Is It Illegal To Change Lanes In An Intersection In West Virginia?

Is It Illegal To Change Lanes In An Intersection In Wyoming? 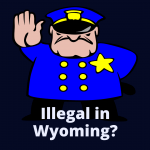