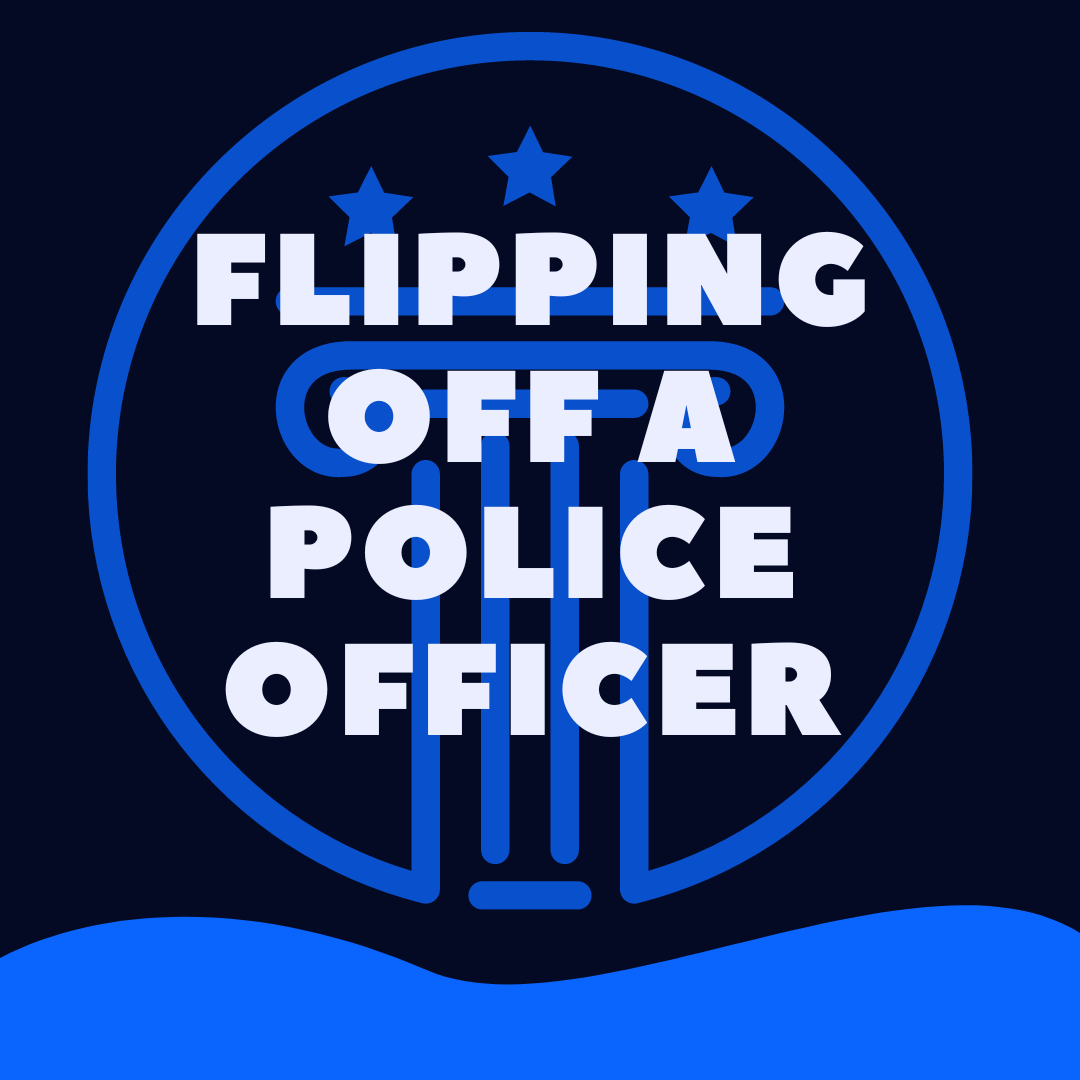 Maybe you’ve had a rough day or a fight with a friend when you get pulled over by a police officer. It could be that the officer was not particularly pleasant during your interaction.

Whatever the reason, during the high emotions of the moment, you may feel the urge to flip the police officer off. While this action is not against the law, it is probably not the best step to take.

Is It Illegal To Flip Off a Cop? (In the United States)

Protection Under the Constitution

Americans’ rights to free speech are protected under the constitution. This means that you can freely express yourself with a few exceptions.

Any hate speech or communication that incites violence is not protected. The First Amendment can not be used in these situations because it put others in harms way.

An example of this would be yelling ‘Fire’ in a crowded movie theater when there was no fire. This First Amendment freedom also extends to words or gestures directed toward police officers.

Under the First Amendment, free speech has a quite broad definition. “Speech” in the case includes more than just spoken words.

Many court cases have determined that there are behaviors that are also protected. Some of these include:

While these actions are protected by the First Amendment, these are examples of “speech” that are not. They include:

Flipping Off a Cop Is Protected Speech?

Yes. Federal courts have determined that that gesture does fall under the free speech protection of the First Amendment.

In one case, a man was arrested for flipping off an officer and charged with disorderly conduct.

Evidently, the man made the gesture because he saw that the officer had radar equipment to stop speeders.

There was no real reason to pull this particular driver over, however. In court, the police officer stated that he had concerns for the safety of the passenger in the vehicle.

To this, the court disagreed stating that showing the middle finger is known to be an insult and not a signal of trouble. This settled the question of ‘is it legal to give an officer the finger.’

Though Legal, Flipping Off a Cop May Not be the Best Idea

Even though it’s legal to make an offensive gesture, you could experience consequences for doing so. For instance, it’s likely that you will get a traffic ticket for any law that you’ve violated.

Additionally, if they even suspect that you are using alcohol or drugs, you could have your vehicle searched and potentially face a DUI.

If any narcotics or illegal contraband are found in your possession, your situation could escalate quickly. While giving the finger is legal, it is an insult and can make a situation worse.

The best step when in contact with law enforcement personnel is to be calm. While giving them the finger may be legal, it just calls additional attention to yourself.

Even if you are in the right in a situation, making an obscene gesture will only escalate matters. If you are arrested, find a lawyer quickly. That simple act can start a process that can become expensive both in time and money.

Use Your Smarts When Dealing with Police

Certainly, you can freely express yourself, but it’s not always in your best interest to do so when dealing with law enforcement.

While you can’t be arrested for it, they will certainly look more closely at you.

The Law and Flipping Someone Off

The free speech rights that we enjoy in the United States are similar in other countries.

This is as long as it does not incite violence.

There have been several incidences in the United States though that ensured that the particular gesture was covered under free speech rights.

In another example, a Detroit woman was pulled over for a speeding traffic violation in 2017.

The officer wrote a ticket for a lesser violation. After they were finished, the woman flipped off the police officer as she pulled away.

This led the cop to pull her over again and give her a ticket for a more serious speeding violation.

This led the woman to file in the courts, and she won with a three to zero decision.

Again, it was legal for her to make the gesture, but it cost her time and money to clear a trivial matter.

Law enforcement officers are humans. While they are trained to deal with tense, difficult situations, sometimes they can push things further than they should.

This can heighten everyone’s tensions and anger.

The best step though is to remain as calm and cool as possible. It’s not pleasant, but it will give you the best outcome.

If you can remain as calm as possible, you’ll be able to speak rationally with the officer.

This allows you to discuss the issue without resorting to profanity and obscene gestures that will only escalate the situation.

If you can maintain your composure, you may be able to get out the situation completely or with only a lighter ticket.

The Legalities of Free Speech Differ in Some Countries

Different countries have similar gestures that convey disgust, protest, or profanity. In the United States, like in many countries, these gestures and language are protected as free speech.

However, not every country views these matters in the same way. So, understand the laws of where you are.

Regardless of the legalities, it is best to avoid escalating a trivial situation such as a traffic ticket with profanity and flipping off the cop.

Avoid it, period. If you can keep your feelings of frustration in check, you’ll be in a better position.

While getting into a situation where you need to deal with a law enforcement officer is truly frustrating, it’s best if you can communicate clearly without insulting them.

The last thing that you want is to end up in court simply because you couldn’t control your anger and your middle finger.

Yes, you are in an unpleasant situation, tired and frustrated, and most certainly angry but if you can keep control of your emotions for the few minutes it takes, you won’t find yourself having to defend yourself in the court system.