Tips For What To Do If a Woman Hits You

While it would be nice to think that women and men are treated the same in the criminal justice system, the fact is that they may not receive the same treatment under the law.

In this article, we’ll cover some of the best practices for dealing with violence committed by a woman.

Tips For What To Do If a Woman Hits You (Discussion)

Be wary of what you read on forums, or even from well-meaning self-defense instructors.

The fact is, men have an uphill battle in society when it comes to domestic violence.

While the words of the law are clear, the application of the law is done by people.

In different parts of the United States, men receive different treatment in domestic violence situations than in others.

While we wish that we could tell men that they should feel comfortable defending themselves with equal force, the law can come down on men in very unfair ways.

When woman are the aggressors in domestic violence, men have to take extra care to protect themselves, their livelihoods, and their children.

Have a Care In How You Respond

While all the states in the United States have some form of self-defense, many men have learned that self-defense is not foolproof.

The legal principles of self-defense are not a get out of jail free card.

Instead, self-defense is a legal “defense” that can be asserted by the defendant when he is charged with assault, murder, or other crimes involving responding with physical violence.

If the prosecutor (and later jury) does not believe that the requirements of self-defense were met, the offender could find himself going to jail for a long time.

To utilize the doctrine of self-defense, you need more than to just have been slapped.

To assert self-defense, you need to believe that you are in danger of further imminent bodily harm or other offensive touching, or that someone else in danger of the same.

You also can only respond with a reasonable amount of force.

For example, let’s say Person A slaps Person B. Then Person A walks away.

Can Person B chase down Person A and slap them back, and then assert the defense of self?

Let’s say Person A slaps Person B and then stops. No more hitting and no threats of more.

Should Person B slap Person A back?

Not recommended. Self-defense won’t excuse ‘eye for an eye.’

But let’s say that Person A slaps Person B, and then stands there and says “I’m going to hit you some more” and then starts swinging at Person B.

Can Person B act to defend himself in a reasonable manner?

But here’s the thing–self-defense cases are very circumstantial and individual.

If one of the parties is much bigger than the other, is experienced in fighting, or has a previous history of physical altercations, the authorities might not believe that his actions were in self-defense.

In some instances, experienced fighters (like MMA all-stars or boxers) who respond with force are not successful when asserting self-defense, because the jury does not believe that such an experienced fighter would actually feel fear of imminent bodily harm.

If a woman hits a man, it is rarely in the man’s best interests to hit her back right away, especially if there are other options to resolve the situation.

Avoiding The Confrontation/Defusing The Situation

Many people do not believe that men can be abused by women.

For this reason, men have the tough job of doing everything possible in a domestic before falling back on actual physical defense of self.

This seems to place an unfair burden on men that is not similarly placed on women.

But until society adapts and accepts that men are also victim’s of domestic violence, men have to do what they can to protect themselves from unwarranted prosecution or protective orders.

In some instances, it may not be possible to do anything to avoid having to defend one’s self.

One of the primary challenges for men when it comes to domestic altercations is that police officers are often confronted with two bleeding people telling opposite stories.

Officers have to look at the available evidence, and that evidence often against weighs men, simply because they appear to be less vulnerable.

Police officers often respond to domestic situations where the aggressor is the male in the relationship, and while they honestly try to go into every case giving the involved individuals a clean slate, they can’t help but see what they’ve already seen 100 times.

To combat that knee jerk reaction to assume the bad guy is the male, documenting the incident can make all the difference.

If a video or audio recording device is available (like on a phone), openly recording the incident can give responding police officers the evidence they need to treat everyone fairly.

While states may differ on the legalities of operating recording devices (video or audio or both) in your home or on your property, utilizing a nanny cam or security camera in a state where it is lawful can also provide backup evidence of what happened.

If police aren’t called to the scene, taking pictures of the scene, saving emails or text messages, and even visiting a doctor to have injuries documented is often very useful.

Other people who get pulled into the altercation (responding police, neighbors, even bystanders) can assist in many different ways.

Second, having other people around can diffuse the incident, as people are unwilling to commit violent family crimes when other people can see them (and report on them).

Third, those bystanders can step in and help stop the incident, so that the person suffering the violence doesn’t have to respond with violence in kind to defend himself.

The police may or may not be helpful to the male in domestic violence situations.

In the thick of things, they might arrest first and ask questions later.

There may be times when it makes sense to make a report to the police when the dust has settled, or with a lawyer at your side.

If a woman hits you, it is a good idea to reach out to a lawyer who practices both family law and criminal defense to get some guidance for now and in the future if things escalate.

A lawyer will be able to give you an idea of what your situation might turn into, and provide you with both information and resources that you can utilize to move forward.

The lawyer could also assist you with making a report to police, child services, or even filing divorce paperwork if that is what necessary. 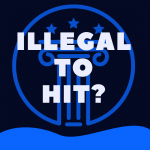 Is It Illegal To Hit a Girl?