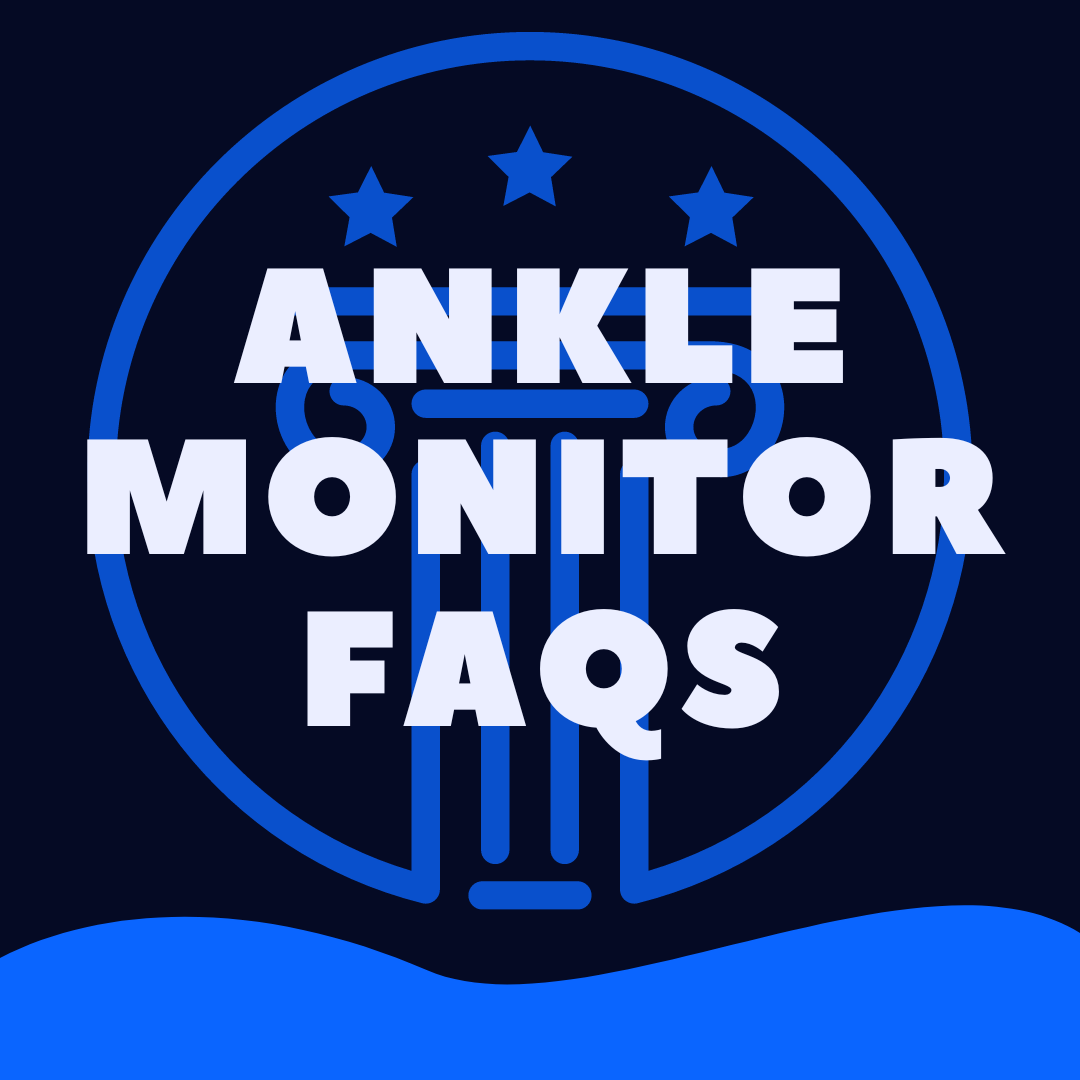 In this article, we’ll answer the most common ankle monitor questions asked by defendants and family members headed into supervised release.

What is an Ankle Monitor?

An ankle monitor is a device that logs information about where the wearer is located and transmits that information to a monitoring center.

It is usually shaped like a close fitting bracelet and is wrapped around the leg above the ankle.

How Does An Ankle Monitor Work?

There are a few pieces to the ankle monitor.

First and most obvious is the monitor itself that is worn by the individual.

Next is the on-site receiver.

The ankle bracelet communicates with the on-site receiver, which is generally located in the same residence at the person wearing the monitor.

The individual generally has to stay within a specific distance of the on-site receiver for the bracelet to communicate with it.

The third piece of the system is the off-site receiver, where the information about the location of the bracelet is logged for humans to review.

Why Is a Phone Landline Required?

Not every monitoring system is the same.

Some tracking systems use the phone’s landline to communicate with the remote monitoring center.

How Far Can You Go With An Ankle Monitor?

How far the bracelet can go away from the on-site receiver depends on the technology of the system.

Some of the tech out there only allows for about 50 feet, while other tech allows for 100-150 feet.

The bracelet may also have to be closer to the on-site receiver at specific times.

How Does The Ankle Monitor Get Charged?

When the ankle monitor is almost out of battery life, the wearer has to plug in the bracelet to a wall outlet.

The wearer cannot take the bracelet off, so he’ll have to stay attached to the cord/outlet while the device is charged up.

How Long Does It Take To Charge An Ankle Monitor?

It can take a few hours to completely charge up an ankle monitor.

How Long Does The Battery Last In An Ankle Monitor Before Charging It Again?

The amount of time between charges varies dramatically by the kind of tech and how old it is.

Some monitors only go 10-12 hours without needing a charge, while others can go 40 hours or more between charges.

What Happens If The Ankle Monitor Battery Dies?

If the battery in the ankle bracelet dies, it will not communicate with the on-site receiver.

The on-site receiver sends a message to the remote monitor, which alerts law enforcement.

Law enforcement may call to check on the individual.

Or law enforcement may obtain a warrant and arrest the individual.

The dead battery could result in the termination of the supervised release.

How much water the ankle monitor bracelet can withstand depends on the device.

Some monitors are 100% waterproof (meaning you could swim with them).

Others are water resistant, meaning you could splash them but not submerge them.

It is best to make sure how water resistant the monitor is before dunking it.

While they are generally not painful, ankle monitors tend to annoy the wearers.

Ankle monitors have to fit close enough to the leg so that they cannot be taken off.

They can be bulky and heavy.

Wearers often struggle to get used to sleeping with the monitor.

It can be difficult to completely hide the monitor under pants.

Can You Go Outside The House With An Ankle Monitor?

This depends on the terms of the supervised/monitored release.

Some people are allowed to go outside the walls of the house, while others are not.

Some people can take walks, and others cannot.

Some people are allowed to go to work or school, and others cannot.

Generally, ankle monitors are quite effective at tracking the location of the individuals wearing them.

The question of whether monitors are effective at preventing individuals from committing crimes is more nuanced.

While the monitors do a great job telling law enforcement where the people are, the monitors do not provide programs, support, education, communication, or reintegration.

It is up to the wearer to notice that the device is not working, and to reach out to his supervisor asap to report the trouble.

Can Ankle Monitors Listen to Conversations?

Some ankle monitors have microphones built in, and others do not.

The purpose of the microphone is supposed to be facilitating communication with the wearer.

Some states have adopted laws that limit law enforcement from using the microphones in ankle bracelets to specific purposes.

The listening-in function varies from state to state, and tech to tech.

Do Ankle Monitors Have Cameras?

We are not aware of any ankle monitors that have built in cameras.

Who Pays For Ankle Monitors?

Most people don’t realize that offenders are required to pay for the cost of the privilege of ankle monitoring.

There may be an initial set up fee, and then daily or monthly fees.

Depending on the jurisdiction, the daily fee could be as little as a few dollars a day, while in others it could be $20 a day or even more.

While a few dollars a day doesn’t seem bad, remember that the individual might have to wear the device for months, or even years.

This can end up costing the offender thousands of dollars over time.

Why Would Someone Have To Wear an Ankle Monitor?

There are many reasons why a person might be wearing an ankle monitor.

One, the person has been charged with a crime, but it is not time for trial yet.

The individual has been released from custody back into the community while waiting the months (or even years) to get to that trial date.

The ankle monitor does not mean that the individual has done anything whatsoever in this case (meaning he hasn’t yet been proven to be a criminal).

Two, the person has been convicted of a crime and has received supervised release into the community instead of a jail sentence.

It costs much less to monitor someone out in the community than it does to incarcerate them.

If the charge is not so serious and the defendant does not represent a significant threat to the community, the bracelet might be a good option.

Third, the person was convicted of a crime, went to jail, and has been released to finish out his sentence in the community.

While a defendant may have been convicted of something pretty serious, and due to the circumstances, prison was the right outcome, circumstances do change.

A person can do really well in prison and eventually (depending on the circumstances) earn a place back out in the community.

Fourth, a person was convicted of a crime, was placed on probation (meaning no jail), and violated that probation somehow.

Electronic monitoring is sometimes used as a sanction for probation violations, especially if the violation involved the use of alcohol (which some devices can detect).

How Long Does an Ankle Monitor Stay On?

How long an individual wears an ankle monitor depends on his circumstances.