Is It Illegal To Change Lanes In An Intersection In Texas?

After research, we were unable to find any statutes on the books that prohibit changing lanes in an intersection in Texas.

In fact, most states have no law prohibiting it.

But you can still get a ticket.

Read on to confirm relevant enacted laws for intersections, passing, and more.

Is It Illegal To Change Lanes In An Intersection In Texas? (EXPLAINED)

Driving on the right side of the road in Texas has stipulations under statute 545.051:

(b)  An operator of a vehicle on a roadway moving more slowly than the normal speed of other vehicles at the time and place under the existing conditions shall drive in the right-hand lane available for vehicles, or as close as practicable to the right-hand curb or edge of the roadway, unless the operator is:

(2)  preparing for a left turn at an intersection or into a private road or driveway.

For approaching an intersection or when you’re about to enter one, statute 545.151 applies:

(1)  shall stop, yield, and grant immediate use of the intersection:

(A)  in obedience to an official traffic-control device, including a stop sign or yield right-of-way sign;  or

(B)  if a traffic-control signal is present but does not display an indication in any of the signal heads;  and

(2)  after stopping, may proceed when the intersection can be safely entered without interference or collision with traffic using a different street or roadway.

Making turns at an intersection relies on statute 545.101 for specifics:

(a)  To make a right turn at an intersection, an operator shall make both the approach and the turn as closely as practicable to the right-hand curb or edge of the roadway.

(b)  To make a left turn at an intersection, an operator shall:

(1)  approach the intersection in the extreme left-hand lane lawfully available to a vehicle moving in the direction of the vehicle;  and

When preparing to turn, proper signaling is required. This is legislated in 545.104:

(a)  An operator shall use the signal authorized by Section 545.106 to indicate an intention to turn, change lanes, or start from a parked position.

(b)  An operator intending to turn a vehicle right or left shall signal continuously for not less than the last 100 feet of movement of the vehicle before the turn.

(c)  An operator may not light the signals on only one side of the vehicle on a parked or disabled vehicle or use the signals as a courtesy or “do pass” signal to the operator of another vehicle approaching from the rear.

Rule of the Road laws and general provisions are found here.

Intersections can become busy with vehicles moving in either direction, at different speeds, etc.

Because there is much going on in an intersection, it’s a bad place to change lanes.

However, in itself isn’t illegal.

But If It Is Not Illegal In Texas To Change Lanes In An Intersection, Why Did I Get A Ticket?

Changing lanes isn’t illegal per se. But doing it dangerously could well result in a ticket.

For instance, a rapid lane change without sufficient warning through signaling to let other drivers know to expect it is problematic.

Proceeding into an intersection when it was unclear at the outset that you could make it through without stopping is also legally questionable.

There is, at a minimum, the expectation that you won’t set off without knowing you can travel completely fully through the intersection.

Drivers are expected to use good judgment.

When failing to do so, a ticket can result in a traffic law infraction, or two.

Not only does this lead to insurance claims, but questions must be answered about what happened sometimes for potential criminal charges.

Perspective and where the blame lies varies depending on the witnesses.

If you’ve been involved in a crash where people were injured or property got damaged, you may want to confer with an experienced motor vehicle accident attorney.

While you can still lean on your car insurance, consulting with a lawyer of your own early on could help resolve some of your initial anxieties about what happens next. 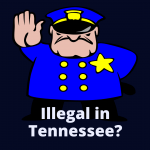 Is It Illegal To Change Lanes In An Intersection In Tennessee?

Is It Illegal To Change Lanes In An Intersection In Utah?