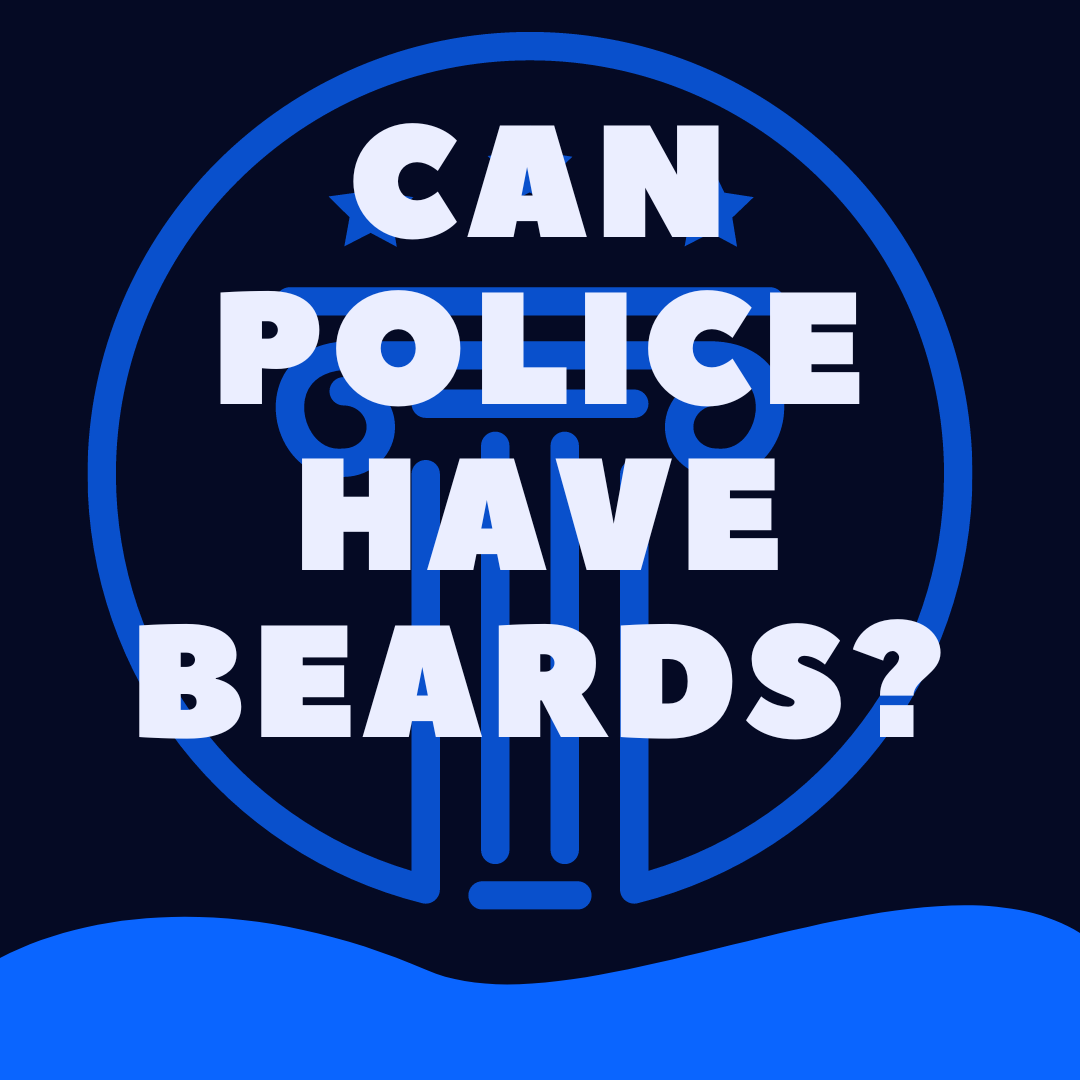 There is a long and conservative tradition around the appearance of police officers, with hard limits on beards, tattoos, piercings, and other fashion choices that stand out.

This is changing these days, however, as police departments update their policies.

In this article, we’ll look at US police requirements for facial hair, and whether or not you can serve as one of the boys in blue while sporting your beard.

Can Police Officers Have Beards in the US?

Each department is able to set its own policies. Some police departments do allow beards, as long as they are well kept.

Some departments allow mustaches and goatees but do not allow full beards.

There are still many police departments that follow the military tradition of forbidding facial hair and requiring a cleanly shaven face.

The most common rule in the United States is that no facial hair is allowed. However, this is being eased over time. In many jurisdictions, you will see officers with short, well-kept beards. These are allowed as long as the beards are kept to less than the specified length.

There are many different police departments in the United States, and their policies are always changing, so it would be hard to come up with a list of all of the different departments that do allow beards.

In Texas and New York, policies have been relaxed so that officers are allowed to wear short, well-kept beards. However, the LAPD restricts facial hair to mustaches and goatees.

In general, the tolerance for beards and tattoos tends to be higher in the coastal blue states, and northern states, than it is in the center of the country and the south, where cultural forces are more conservative.

However, there are plenty of exceptions, with some progressive policies in red states and some traditional restrictions in blue ones.

Contact your local police department to get their detailed policy. They will let you know what is required, and how you can apply.

Police departments that prohibit beards still usually have 2 exceptions. For this reason, you might see a bearded police officer anywhere, even in a jurisdiction that doesn’t allow beards.

The first exception is religion. The Sikh religion requires its adherents to grow a beard, as do some other faiths.

If an officer has a religious reason for maintaining a beard, police departments typically allow this, even if they have a policy otherwise.

The second exception is for officers who are undercover. It would be hard to keep a disguise if you had to be clean-shaven, so undercover operations officers are allowed to grow facial hair like beards.

There is a long military tradition of forbidding beards and facial hair, and it is still in effect today.

Officially, long facial hair is harder to maintain, it can become unhygienic in rough environments, and it could be grabbed or pulled in close combat.

In practice, these aren’t major concerns for most police officers, who are armed and operate in cities rather than in warzones.

The most accurate answer to “why do police departments continue to ban beards” is simply, tradition. They are doing things today the way they have been done for a long time, whether or not it’s the best way.

Are these Policies Changing?

If there is a trend, it is toward embracing beards and tattoos in police departments, for a couple of reasons.

It is becoming harder to attract police officers to the force, and many of the candidates they are looking for are men who like beards and tattoos.

Recruitment is difficult if you demand that people change things about their appearance that are important to them.

It’s also changing because beards and tattoos tend to humanize police officers and improve engagement with the community.

Justin Dority is a police officer who successfully campaigned in his department to change the policy and allow beards. He believes that this change is a positive one.

“I support beards and tattoos because I fully believe people would be and are more relaxed and comfortable when speaking with us, and maybe they would approach us different than they do now because not everyone feels comfortable in speaking with the cops,” said Dority.

Can I Get a Job as a Police Officer with a Beard?

There are police departments around the United States that do allow beards, although they typically restrict the length and require them to be very well maintained.

If keeping your beard is important to you but you dream of becoming a cop, you shouldn’t have to compromise.

You might have to move, though, depending on where you live. Some police departments have policies against beards, while others are more lenient.

If you want to work where you live, you’ll have to accept your local police department’s policy.

However, if you are able to move to a different city where the policy is different, there are certain departments that would be happy to have you, beard and all.