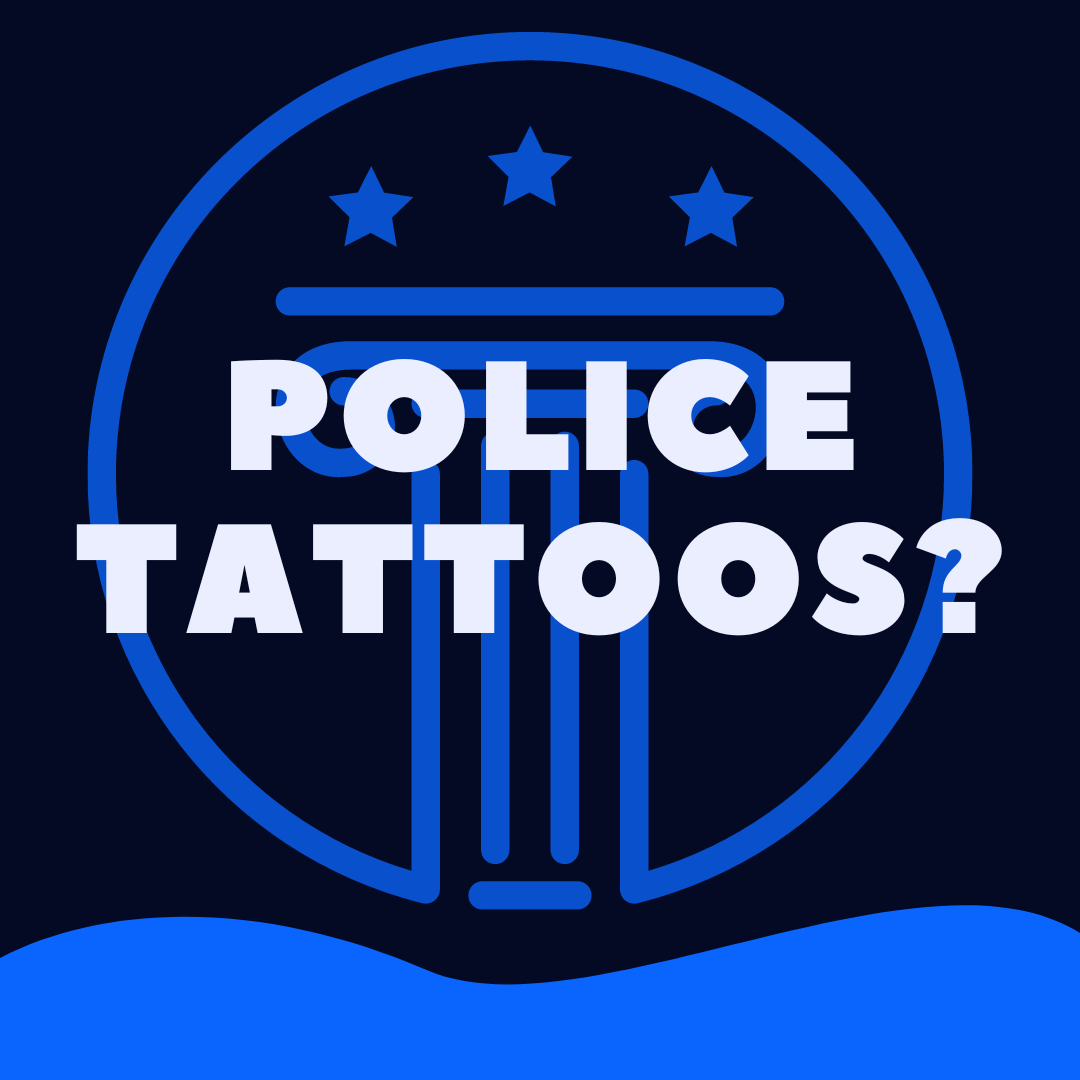 Answer: Yes, police officers can have tattoos, through individual departments may have different rules about whether those tattoos can be visible while in uniform.

Can Police Officers Have Tattoos? (In the United States)

Shifting attitudes and changing opinions about police officers with tattoos are now shifting police department policies across the United States.

Many police departments keep to the standard guidelines about tattoos.

Many police forces are rewriting their department policies to allow officers to have tattoos if dress code policies are upheld.

Police officers and the departments they work for adapt to trends and social norms as things change around them.

Tattoos Were Only For Criminals

When tattoos first became a noticeable trend, certain types of people were getting them.

There was the so-called tramp stamp that so many females were getting at one point.

There were the barbed wire armband tattoos that so many college guys got as their first and only tattoos.

There were even alternative individuals whose lifestyle made a few tattoos seem edgy and cool.

Yet, the people most likely to have tattoos were criminals for the longest time.

Due to the ways tattoos can communicate certain ideals or associations the tattooed person holds. Criminals could share all their associations, experiences, and achievements without a word to those other individuals who understood the language of tattoos.

For this reason, police everywhere were not allowed to have tattoos.

Yes, in many places, an officer could get away with having a tattoo as long as it could be covered entirely while that officer was on active duty or representing the police department in an official capacity.

In other places, police departments would not hire anyone with a tattoo, no matter what.

This policy became a severe issue as many of the most qualified candidates for the police were automatically ruled out due to tattoos.

When the police are supposed to keep the criminal population in check, the visual separation that a “no visible tattoos” policy enables was sometimes in everyone’s best interest.

This not only made the police officers look clean and separated them from the criminals, but the tattoo policy also allowed easy identification of anyone tattooed with symbols or messages for affiliates or enemies.

Ideas regarding tattoos are shifting, and body art is no longer the taboo practice that it once was.

This shift acknowledges that tattoos have become a more mainstream form of expression, widely accepted, and no longer the criminal representation they once were.

In light of changing trends and socially acceptable practices, tattoos are now seen as a way to carry your art with you daily.

Many police departments were missing out on potentially stellar police candidates because they had a tattoo that was becoming a problem, even if it wasn’t visible.

Missing out on well-qualified officers was a detriment to all police departments in our country, so the tattoo policy needed to change.

Not every police force across the nation has changed the way they operate simply due to changes to the tattoo policies.

While there are many police departments drastically updating the policies they have on tattoos, some departments remain staunchly rooted in the tradition of the roles that the police provide for the communities they are serving.

Many departments don’t want to change and don’t even think about rewriting their policies on dress codes or what is or isn’t appropriate.

These departments are primarily in locations with an older, more traditional population who would not handle the change well, no matter the situation.

Some departments are trying to take a more modulated, middle-of-the-road approach. These departments allow tattoos but have precise rules about what can and can’t be done.

For example, you may be entitled to see the tattoos on your arms, but anything about the collar is a serious no-go.

This is the route many departments are taking to deal with the tattoo issue, as it is the most widely enforceable and accepted solution.

The LAPD is a department where the old rules were rewritten so that any officer is allowed to have tattoos as long as they are not on the face or neck, nothing above the collar.

This has been implemented state-wide, making the law enforcement workforce much more accessible to the other state citizens.

Other places are following suit, with Norfolk, Virginia, Philadelphia, and Honolulu allowing their officers to have exposed tattoos while on duty.

There are specific stipulations, of course, like nothing vulgar or offensive and no tattoo above the collar on the face or neck.

Some other departments are progressing more slowly, with small, meaningful steps towards integrating tattoos as something accepted. State troopers in Vermont are now allowed to have tattoos at all. Before you were an ineligible candidate for hire, if you had a single tattoo anywhere, they still had to be covered on duty, but tattoos no longer make you ineligible for the role.

One small Massachusetts town called upon its citizens to share their opinions on tattooed police officers.

A Facebook profile was created and the people allowed to weigh in and provide any insight they thought relevant about the topic of whether their police force should be allowed to have visible ink.

Tattoos of recent times have been more artistic showpieces that display the talent of a tattoo artist as opposed to a means of displaying your affiliations and gang achievements as they have been in the past.

This shift in the views about tattoos is being reflected in the dress code policies of police to allow them to enjoy personal expressions and freedoms they once were denied.

This shift is a reflection of how time and policy can be more than ready for an overhaul.