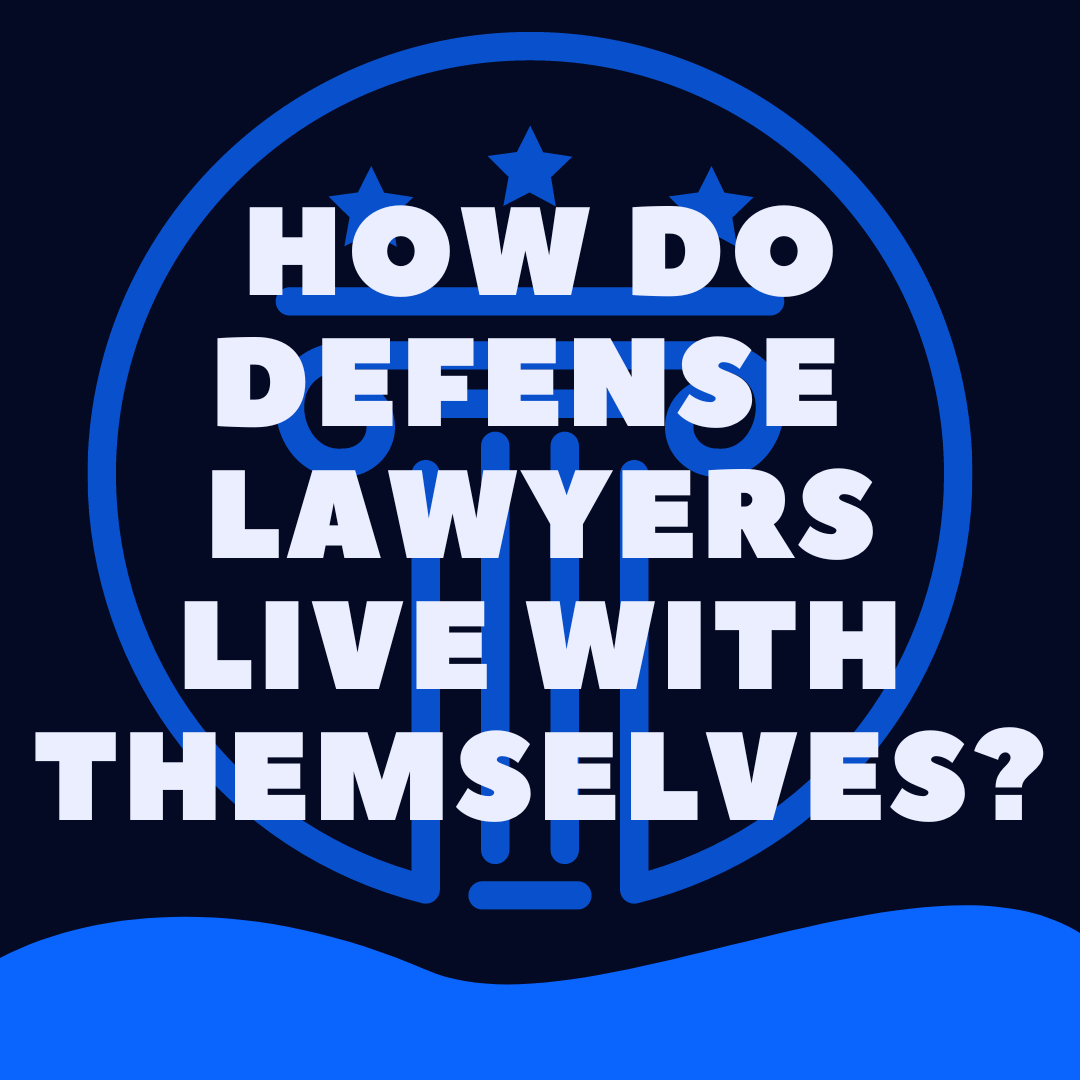 Defense attorneys are often hired to represent clients who are accused of committing the worst possible crimes imaginable.

Many of these clients are guilty.

How is this possible? How could the defense lawyer help someone accused of something so terrible, especially when they know that the client actually did it?

As a defense attorney, I can’t speak for everyone else.

But I can tell you how I was able to live with myself.

Criminal Defense From The Lawyer’s Point of View

From the outside, defense attorneys appear to be working very hard to secure the release of their client, a “not guilty” verdict, a return to normal life/society, usually without considering the terribleness of the crime.

For an active defense attorney, the ultimate question of “guilt vs innocence” and proving it is only a part of what a defense attorney does for a client accused of a crime.

A criminal defense attorney has multiple jobs in a case, including:

If we as lawyers allowed anyone (police, judges, court staff, journalists, witnesses) to bend the rules in order to secure the conviction of an obviously guilty human, the door is open for it to happen to an innocent individual.

This is all well and good when the accused is a stranger who lives far across the country.

But when it is you or something you love very much involved, you would want the protection of the laws of this country very much.

By forcing the government and those involved in the case to follow the rules and toe the line in every case (guilty or not), the rights of the rest of the citizens of this country are protected.

Police officers understand that if they don’t follow the rules, their targets walk away without punishment, and that discourages shortcuts.

This may rub some people the wrong way, especially if the accused took the life of another or committed atrocities against a vulnerable person, such as a child.

A good defense lawyer actually benefits the government, citizens, and even the victim in the case, for reasons like this:

A good defense is something that all citizens are entitled to in our country, and no one should be willing to compromise that right.

Other things that we do for a defense client that have nothing to do with guilt or innocence include:

People may argue that a guilty defendant does not deserve to have his hand held on his way to life in prison.

But I tended to look to my own behavior and conscience as a person to guide me, rather than to the behavior of others.

I don’t believe in “eye for an eye” and I have the choice to respond with empathy rather than anger/revenge/dismissal.

I won’t let someone else’s bad choices compromise my actions in how I treat others.

Defending a Guilty Client vs an Innocent Client

The government cannot just filed charges against citizens unless they believe they can convince a jury “beyond a reasonable doubt” that the defendant is guilty.

For this reason, many defendants who have reached the stage of charges being filed are facing a mountain of validly/legally collected evidence against them.

Having seen enough of these cases, we know for the most part when a client is guilty.

We will do everything within our power to assist the client, but we pretty much know where the case is going.

For the most part, no matter what we do, the case is going to result in a conviction when the evidence is validly/legally collected.

Most of our job is negotiating the plea and the sentence.

Clients love to ask defense attorneys about their ‘win-loss’ record.

But for the most part, this is a meaningless stat; most thriving and successful defense practices have lots of clients that go to jail.

Our definition of a “win” is different than that of the prospective client.

The prospective client thinks a “win” is a not-guilty jury verdict or all charges dropped.

For us, a win could be a conviction plus drug treatment instead of prison, a conviction with weekend community service rather than straight jail so the client can keep his job, and so on.

Frankly, as attorneys, we often believe that a conviction (and jail) is the right result, even for our clients.

Sometimes an extended jail sentence is the only way a client can get clean, or get separated from a toxic relationship.

For the most part, we don’t lose sleep over obviously guilty clients.

We know that jail is the right place for them and the community, and that they’ll end up there at the end of the case.

And, as noted above, the assistance of a defense lawyer is more than just the legal stuff….there’s compassion and empathy stuff in there too.

In the most serious cases, everyone is grieving, including the friends and family of the accused.

We help by standing in where they cannot.

The real trouble for us comes when we do not believe our client is guilty, or should not be sent to jail because of other circumstances.

For example, a working father accused of a crime may be the only source of income supporting a spouse and multiple children.

Sending him to jail could (and likely would) result in homelessness, hunger, insecurity, and danger.

These are the toughest cases, and we don’t sleep at night while trying to help these people.

These are the ones that stress us out, that give us grey hair, that cause us to work too hard, that cost us money.

While it feels better to help people who don’t deserve to go to prison, they aren’t always the clients defense lawyers get excited about.

Because if we do something wrong, if we fail in any way, it becomes our fault that an innocent man is wrenched from his children and his life.

But What About Attorneys Who Help Guilty People Get Free On Technicalities?

The law is the law, and everyone has access to the same resources.

The prosecutor, the defense lawyer, the judge, the police officers, everyone knows what they are supposed to do, for the most part.

It is really rare for anyone to spring some random technicality on the court or the prosecutor that would produce an outright dismissal of charges against a defendant, guilty or not.

In most cases, if a defense lawyer manages to get a case dismissed on a technicality, it means that someone screwed up.

Someone did something wrong on the side of the prosecution or the court, and the answer to that wrong to safeguard the rights of all people in the United States is to not allow the case to proceed.

This is why some cases get dismissed, even when the defendant in the case is guilty.

And how can attorneys live with themselves, knowing that a bad person is back out on the streets because of their efforts?

Some of us understand the concept of hard work and performing our jobs to the utmost of our ability.

And some of us don’t live with ourselves. We don’t always feel awesome and great and happy about these types of results.

A new study finds U.S. attorneys have higher rates of alcohol abuse, depression and anxiety than other highly educated professionals. More than one-fifth of licensed, employed attorneys consume alcohol at levels consistent with problem drinking, compared with 12 percent of other professionals.

We feel angry at law enforcement for failing at their jobs, and we feel trapped between what seems right and the oaths we have sworn.

And sometimes, defense attorneys can’t handle helping these kinds of people, and leave the practice of law to do other things, like start a blog answering legal questions.

Many defense attorneys leave the practice of law, or move into other areas of law that are more consistent with their values and beliefs.

The world view of those who continue to practice major felony criminal defense is not the same as a laypersons.

They often view major death cases or complex crimes as interesting puzzles or challenges, rather than helping a person through a tough time or protecting the broad legal rights of citizens.

They can also see major criminal defense cases as valuable firm asset, viewing a rich client accused of a crime as a way to pay the firm’s bills for the next 12 months, put money into their child’s college fund, or pay for the upcoming holiday to the Hawaiian Islands.

However, I think that this is a very small fraction of practitioners, a much smaller percentage than you’d think.

The fact is, most of us do care quite a lot, even if those feelings are not obvious to people on the outside looking in.