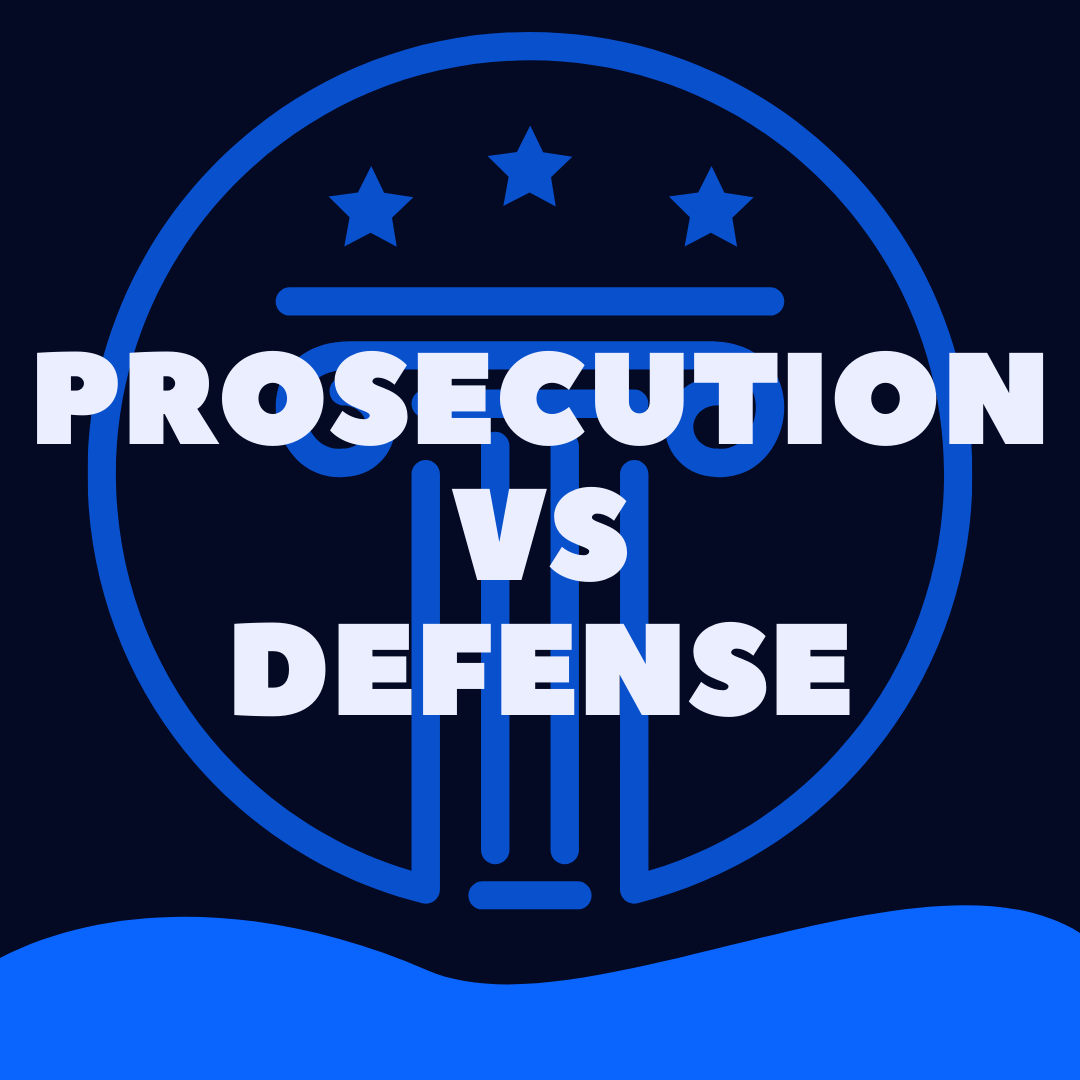 I have worked as both a prosecutor and a defense attorney.

While people in both of these roles pursue justice in our legal system, they go about it in vastly different ways.

In the article that follows, you’ll learn about the differences between these roles, as well as what it is like to be a prosecutor and a defense attorney.

Who Does A Prosecutor Do?

The primary job of a prosecutor is to uphold and enforce the law.

This is different from the role of a police officer on the ground, writing tickets or responding to calls for help.

A prosecutor is almost always a trained lawyer, who is familiar with the criminal laws in her jurisdiction.

When the laws are broken, the prosecutor is there to bring a case through to adjudication and punishment.

The threat of punishment is one way of enforcing the laws, as people will be less likely to commit crimes knowing that a prosecution (and jail or fines) could result.

What Does A Defense Attorney Do?

The primary job of a defense attorney is to assist a person charged with a crime through the criminal justice system.

As part of that, the defense attorney might take action to enforce the client’s rights to the legal protections guaranteed by our justice system (right to a fair trial, right to call witnesses, right to avoid illegal search and seizure).

But in the end, the fact that a defense attorney is present and is working hard for their client is a deterrent to those who would fail to follow the rules and requirements in our established justice system.

Think of it like a system of checks and balances.

Who Does The Prosecutor Work For?

In general, the prosecutor’s “client” is the government entity that has hired them as an employee.

This could be a city, county, township, state, or even country.

The prosecutor is pursuing the goals and aims of her client, the government entity.

Who Does The Defense Attorney Work For?

It is more complicated on the defense side.

In general, a defense attorney works for their client.

The defendant contacts them, hires them as their legal counsel, and pays them.

That attorney “represents” that particular client.

That being said, the defense attorney may be employed by someone who is not the client.

This could be a private company that provides legal defense services.

This could be a government agency that provides legal defense services.

This could be the same government entity that employs the prosecutor.

The defense attorney might “work for” that government entity, corporation, or agency.

But in the end, the defense attorney only “represents” the client.

The defense attorney has the duty to the client and not to the agency that is paying them if the client is not.

What Is The Goal Of the Prosecutor?

I see websites that talk about the goal of the prosecutor’s job to prove cases beyond a reasonable down, like winning jury trials.

And yes, winning jury trials is an important part of the job, but not the actual goal of the office.

Instead, I’d say that the primary goal of the prosecutor is “justice” and achieving that happens in many different ways.

First, prosecutors act as a gate to making sure only the cases that need to go through the system, actually go through it.

A big part of a prosecutor’s day is sitting and doing intake of recent cases brought forward by the public or law enforcement officers.

A prosecutor makes judgment calls daily about which cases to pursue, and which to send back for more investigation, or to “no-file.”

A large percentage of cases are actually never pursued by prosecutors.

Sometimes the case is not the right fit for a criminal prosecution. (Think of people who commit crimes in the throes of a mental health crisis–the situation might be better suited for mental health assistance/intervention).

Sometimes the budget plays a role–pursuing one case which would cost a lot of money to prosecute, while you could use the same resources to pursue hundreds of others.

Sometimes these negotiated resolutions involve a lesser punishment, or even a dismissal of some charges.

This might seem like a loss or disappointment to the community, but the prosecutor’s office “wins” whenever a case can be resolved in a reasonably fair manner without a lot of cost and expense to the public.

Yes, prosecutors are working to help people, to address wrongs in the community, and to punish people who deserve it.

But taking cases to trial is only a real small part of it.

What Is The Goal Of The Defense Attorney?

People outside the system would say that the defense attorney’s goal is to prove the client’s innocence.

If the client is innocent, this would certainly be a part of it.

But in general, the first duty of the defense attorney is to actually be a guide to the client through the justice system.

Most defendants are coming into the system for the first time.

Things are very scary, and unfamiliar.

As a defense attorney, the bulk of my time was spent holding the clients hand (figuratively).

I spent hours on the phone with clients addressing fears, answering legal questions, pouring over the evidence with them, explaining step by step what would happen, or explaining what was happening (as it happened).

Yes, the goal of the defense attorney (like the prosecutor) is justice.

But justice can look like making sure a client is 100% informed about the proceeding, his rights, the state of the evidence, and his options.

Justice can look like a negotiated settlement that incorporates substance abuse treatment in addition to a jail sentence.

Justice can look like a life sentence in jail without the drama and trauma of a public and very expensive jury trial.

Do The Prosecution and Defense Have To Be Lawyers?

In all but rare circumstances, prosecutors and defense counsel (at least in the United States) have to be lawyers.

This means that in most cases they have law degrees, taken and passed a bar exam, passed the background check, been deemed fit in character, and maintain their license by paying their yearly fees.

In some states, law students in their second or third years of law school may appear in court and assist clients under the supervision of an actively certified lawyer. (You’ll hear them in court when they say their name and announce that they are a “certified law student with John Doe” rather than “counsel appearing with John Doe.”)

What Does A Usual Day For A Prosecutor Look Like?

People who want to be prosecutors need to be able to multi-task, and jump from task to task quickly.

For most prosecutors, a regular day starts between 7-8am.

This is not because prosecutors are morning people and like to get to work early.

Instead, their beginning of their day is usually dictated by daily hearings (like arraignments, motions hearings, and sentencings) that happen first thing in the morning before trials kick off for the day.

The length of the day will then depend upon whether that prosecutor is in trial or has trial coming up.

If there’s no trial incoming, the prosecutor will spend the rest of the day popping in and out of hearings, reviewing new cases for filing, talking with defense lawyers about existing cases, reviewing evidence, taking phone calls, and more.

On a good day, they’ll probably work until 5-6pm.

On a bad day (like trial), they’ll be there until the work is done.

This is one major difference between defense counsel and prosecutors–prosecutor’s aren’t worried about “billing” or how much money the client has.

The prosecutor doesn’t have to worry about billing enough to pay their legal assistant or the office rent.

They just work until the job gets done.

What Does A Usual Day For A Defense Attorney Look Like?

A defense attorney’s day in the life actually looks really similar to the prosecutor’s.

Remember, in every hearing the prosecutor attends, there is usually a defendant and the defendant’s attorney.

However, the primary difference is that defense attorneys are continually vetting new clients and new cases, talking about costs and billing, and managing office administration.

Is It Better To Be A Prosecutor Or Defense Attorney?

I have done both prosecution work and defense work.

There are joys and pains to both.

As a prosecutor, it feels good to be “on the side of right.”

You are representing the interested of the people, not one particular person.

If you have a bad day in trial, you aren’t really letting down a client who is then getting handcuffed and led away from weeping family members.

You will just resolve to come back the next day and do a better job.

But on the other side, there are some personal limitations to being a prosecutor.

You don’t have much control over your caseload or the kinds of cases you work on.

You might not always feel challenged, as the cases may not improve in complexity as your skills improve.

And while you make a decent salary (I hope), there isn’t a lot of room to make more money like private retained lawyers can make.

if you work harder on a given day as a prosecutor, your salary is the same.

But as a defense attorney, depending upon the arrangement or position you have in your firm, working harder than other people in your office can result in dramatic increases in the amount of money to you take home.

As a defense attorney, you definitely come into contact with people that are deplorable.

People that have done bad things.

But the upside is that if you don’t want to take a case, defense attorneys can say no.

As a defense attorney, your job is not to judge people for the deplorable things they are alleged to have done.

It is to assist them and ensure that justice is served in their individual situation.

Ultimately, there is honor on both sides of the coin, but what counts as “better” will have more to do with you as a person and less about the moral judgments of our community outside looking in.

Similarities Between Prosecutors And Defense Attorneys

In many ways, lawyers who work as prosecutors and defense attorney are the same.

Because there are so many similarities in job duties and skills, it is fairly common for attorneys to work at some point in their career as prosecutors before they become defense lawyers, and vice versa.